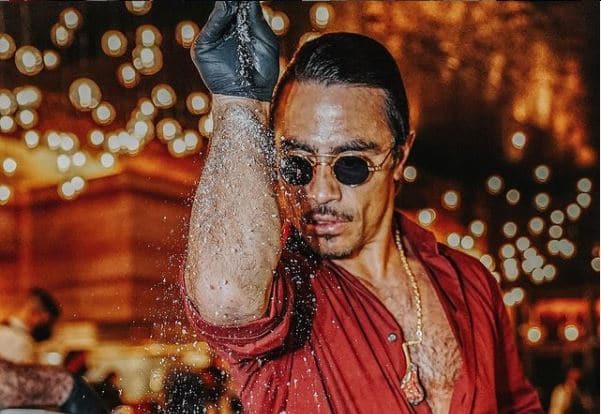 Nusret Gokce, better known as Salt Bae is a 38 years old Turkish chef and restaurateur. He became an Internet meme in January 2017 due to his unique technique for preparing and seasoning meat. Bae is the owner of a chain of luxury steak houses called Nusr-Et. As of 2022, Salt Bae net worth is estimated to be roughly $65 million.

Salt Bae was born Nusret Gokce on the 9th of August, 1983 in Turkey. He was born to his parents, Faik and Fatima Gokce. His dad, Faik was a mineworker. He has three brothers, Ozgur, Ugur, and Erman Gocke. His three brothers are also chefs.

Bae has studied at Faik Sahenk Ilkokulu. However, he had to leave school while he was studying in 6th grade. As per the reports, he was forced to leave school by his family to serve as a butcher’s apprentice in Istanbul.

Bae has worked for free in the local restaurants of various countries like Argentina and the United States. He was worked without any charge to earn experience as a cook and start his career as a restaurateur. In 2010, he opened his first restaurant in Istanbul. Then, in 2014, he opened another restaurant in Dubai.

You May Also Like:   Richest Casino Owners Ranked by Their Net Worth 2022

Bae became famous in January 2017 after a series of his cooking videos went viral on the Internet. He reportedly went viral through a video titled “Ottoman Steak”, which was posted on his restaurant’s Twitter account. The video received around 10 million views on Instagram. In the viral videos, he was seen suavely cutting meat and sprinkling salt.

His unique style of sprinkling salt helped him to become famous as Salt Bae. He has a peculiar style of dropping salt from his fingertips to his forearm and then sprinkling salts onto the dish. Though his dish looked delicious from the outer look, it has received mixed reviews from critics. Steve Cuozzo, The New York Post critic called his steak mundane and hamburgers overcooked. Likewise, other critics described his dishes as over-salted and overpriced.

Salt Bae has recently inaugurated his new restaurant in London. He also shared a glimpse of his new restaurant named Nusr-Et Steakhouse London on Instagram. However, customers don’t seem quite satisfied with the price of the exorbitant dishes. Recently, one of the customers who visited his restaurant shared an invoice on Twitter on which the total bill came to £1821.40.

The Twitter user, Muttaqi shared a tweet on September 27, 2021, where he wrote “It’s cheaper to fly and have food at Salt Bae’s Turkish restaurant than to go to the London one. £9 for coke. £630 for Tomahawk steak. No Thank You.”. He also shared a photo of the bill showing the total due and the price of the dishes.

Salt Bae’s present relationship is unknown. Either he is still single or married, that has been still the subject of mystery. In the past, Bae was in a relationship with the co-founder of Nusr-et, Mithat Erdem. Likewise, he has also dated the CEO of Dogus Group, Ferit Sahenk.

As of 2022, Salt Bae’s personal wealth is estimated to be around $65 million. He has amassed a huge fortune from running the restaurant in various places of the world for over 10 years. Bae also owns a chopper and many luxury cars.

Mike Mora Net Worth: How Rich is Kelis’ Husband Actually in 2022?

Barry Weiss Net Worth: How Rich is the Storage Wars Star Actually?