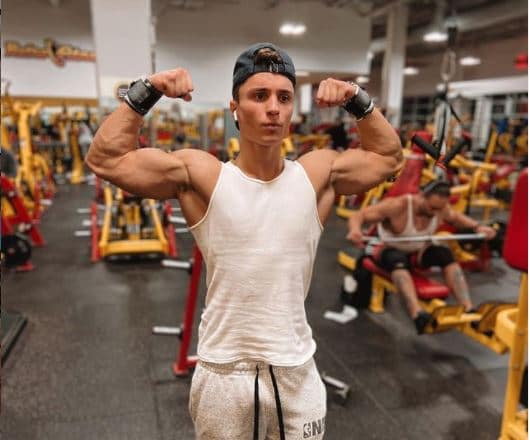 Peter was recently featured as one of the youngest contestants on the second season of Netflix’s dating game series “Too Hot To Handle”, which premiered on June 23, 2021.

Peter Vigilante was born on 6th September 1999 in Staten Island, New York, United States. He was born to parents, Anthony and Louise Vigilante. Peter has mentioned his mom as his No. 1 woman in his life. His mom also makes an appearance on his TikTok videos. Peter has four brothers and two sisters. One of his brothers named Michael passed away in May 2005.

Regarding his education, he has initially studied at New Dorp High School based in New York. Later, he joined Seton Hall University located in South Orange, New Jersey. While studying in high school, he was on the track and field team. Though, we are yet to get more information on his athletic career.

Peter is mostly known for his fitness and weight lifting videos on TikTok. To date, he has been able to gather 2.3 million followers and 61.8 million likes on his TikTok account. Peter’s most recent video made on August 25, 2021, has over 4.3 million views. In the video, he was seen promoting his new dating series “Too Hot To Handle”, by drinking red wine in public places. He shared his happiness to be featured on the show by a video with a post “I’m in time square baby! Also, I ruined my Balenciagas for this so this better pop”.

Peter is also quite popular on Instagram. He is currently followed by over 116K people on his Instagram. Likewise, Peter has his own self-titled YouTube channel. Though, he doesn’t seem much active on YouTube. He has just made two videos since he started his YouTube channel on February 27, 2019. Peter has also made an OnlyFans account, where he has 409 fans. He is currently charging a subscription charge of $30 per month to those, who want to join him on Only Fans.

Peter has recently appeared on Netflix’s dating series “Too Hot To Handle”. From the promo video, he was able to impress the audience, where he said “The moment I talk to a girl, they just fall in love with me”. The first batch of the episodes of the series premiered on June 23, 2021, and the second batch of the episodes will premier on June 30, 2021.

The popular dating series “Too Hot To Handle”, has a unique concept. The series is made for the young contestants, who would be tested on for four weeks. The real deal is that the contestants would have to agree not to have any sexual contact for four weeks. In the first season, all ten contestants were announced as the winners of the reality show, where they split the remaining prize amount of $75,000.

You May Also Like:   Jordan Peele Net Worth: How Rich Is the Filmmaker in 2022?

A post shared by Too Hot To Handle | Peter (@petervigilante)

At the current age of 22, Peter Vigilante stands at a height of 5 feet 9 inches or 175 cm tall and weighs around 70 kg or 154 pounds. He has an athletic body structure while his measurements like chest size, waist size, and arms size are not available at the moment. Likewise, his hair color and eye color are both light brown.

Peter Vigilante is possibly single right now. We have not heard any news on his love life yet. He is a dashing guy, so it’s hard to believe that he has not dated anyone yet. Peter seems to be hiding love affairs. He has not either seen roaming around with any ladies in his Instagram and TikTok videos.

As of 2022, Peter Vigilante’s personal wealth might be in the range of $50,000 to $150,000. He must have gathered the satisfying figure from working as a personal trainer. On average, a personal trainer’s annual salary in New York is around $75,000. Peter seems to be getting more than that since he is a popular TikTok star.

Charles Payne Net Worth: How Rich is Fox Business Contributor?