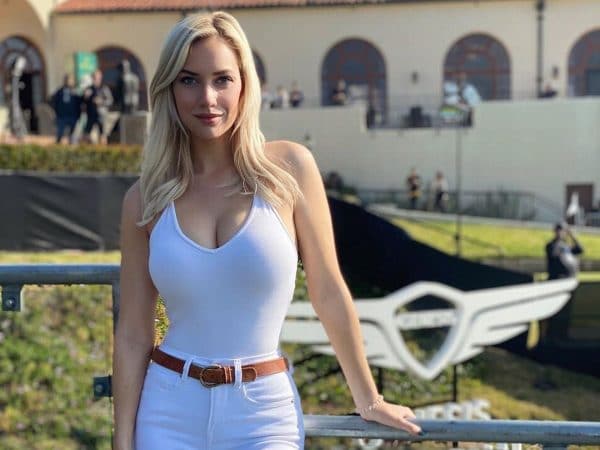 Paige Spiranac is an American Instagram star and professional golfer. She is known for posting trick-shot videos on her Instagram account. Her account has more than 3 million followers. As of 2022, Paige Sprinac net worth is estimated to be $3 million.

Paige was born on March 26, 1993, in Wheat Ridge, Colorado. Her father Dan was a football player and was a member of the 1976 Pittsburgh Panthers national championship while her mother Annette was a professional ballerina.

Paige wanted to become a gymnast and hoped one day to compete in the Olympics. Her gymnastics dreams got shattered due to her broken kneecap twice. She then shifted her focus towards golf. Regarding her education, she graduated from San Diego University in 2015.

Regarding her personal life, she accepted a marriage proposal from Steven Tinoco. He is a former minor league baseball player.

Paige Spiranac Net Worth and Career

In her junior career as a golfer, she won five tournaments including the 2010 CWGA Junior Stroke Play. At that time, she was a top-20 junior player in the world and top-5 college recruit. She was awarded a golf scholarship from the University of Arizona.

You May Also Like:   Stephen Curry Net Worth: How Rich is the NBA Player in 2022?

In her freshman year, Paige participated in Windy City Intercollegiate, Pac-12/SEC Challenge, and Wildcat Invitational. For her sophomore year, she transferred to San Diego State. She finished her senior season with the Aztecs’ first Mountain West Conference Championship.

Paige’s fame grew enormously in 2015 after a Total Frat move article encouraged people to check her online. Her Instagram followers jumped from 10,000 to 100,000 in just two days. With that amount of followers, she got many sponsors and endorsement deals.

As a pro golfer, she participated in CoBank Colorado Women’s Open in 2016. She won the prize money of $1,750. She also performed on Cactus Tour at Las Colinas Club but managed to get 14th place in the Tour. Her first win as a pro golfer came at Scottsdale’s Orange Tree Country Club.

Sprinac was invited to play at Dubai in 2016. Since then, she hasn’t played professional golf and moved her mind to growing her brand. She has also started a podcast called “Playing-A-Round with Paige Renee”. The first episode titled “Teeing Off” was released on February 7, 2020.

The 29-year-old Instagrammer or golfer stands at a height of 5 feet 6 inches or 168 cm tall and weighs around 60 kg or 132 pounds. Her body measurements are 35-26-36 inches. Meanwhile, her hair color is blonde/brown and eye color is dark brown. Her shoe size and dress size are 7 (US) and 6 (US) respectively.

You May Also Like:   Cara Banks Net Worth: Height, Age, Bio, Husband & More

As of 2022, Paige Spiranac’s personal fortune is estimated to be $3 million. She has earned little during her time as a professional golfer compared to what she earns from Instagram. In 2017, she signed a deal with Parsons Xtreme Golf to represent its golf clubs in social media and television ads.

Paige’s main source of income is from sponsorships and endorsement deals. She has signed deals with Mizzen + Main and Philip Stein Watches.

Cedric Ceballos Net Worth: How Rich is the Former NBA Player?