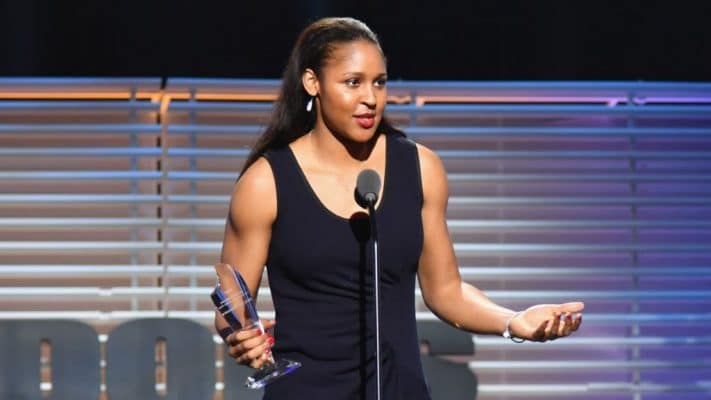 Maya Moore is a 33 years old American professional basketball player. She is best known for playing on the Women’s National Basketball Association (WNBA) for the Minnesota Lynx. Moore has won 4 WNBA Championships. As of 2022, Maya Moore net worth is estimated to be around $350 thousand.

Moore was taking a break from her WNBA career in 2019 and 2020 to help Jonathan Irons on his release from the Jefferson City correctional center and to get his conviction overturned. Irons was released on 1 July 2020.

Maya Moore was born on 11th June 1989 in Jefferson City, Missouri, United States. She was raised by her mother, Kathryn Moore, who has introduced her to basketball when she was 3. As a kid, she used to practice basketball at a hoop that was placed on the back door of her apartment. Her father, Mike Dabney was also a collegiate basketball player who was not there while she grows up.

Regarding her education, she has studied at the Moreau Heights Elementary School. Then, she joined Collins Hill High School. While playing at the high school, she held a record with 125-3 with the Eagles. As a junior, she had an impressive career when she earned the Naismith Prep Player of the Year. She also received the Naismith award.

Moore continued to impress with her good form when she turned senior. She was named the Most Valuable Player of the Tournament when she scored 75-61 with the team Collins Hill Eagles. Later, she went on to score 48 points which helped the team get a victory against S. Elizabeth. She has in fact helped her high school team to get win 4 consecutive state championships.

You May Also Like:   Jermall Charlo Net Worth: How Rich is the Boxer Actually in 2022?

In 2005 and 2006, she started a new journey playing for the Georgia Metros 16U Mike Travel Team. Her inclusion in the team beneficial as The Georgia Metros went on to win 4 National Championships. Moore still continued her love for basketball when she joined the University of Connecticut and played for the women’s team Uconn Huskies.

During the 2007-08 NCAA season, she helped the Huskies to get a win with a 36-2 record. The win with the big margin was the best record of Huskies since they played in the Final Four games of 2004. In the 2007-08 season, she made an average score of 17.8 points in each game. As a freshman, she was named the Big East Player of Year, and with that, she became the only second freshman to get the title in history.

Moore continued to show her impressive game during sophomore year, and she won the Big East Player of the Year for the second time. With her good performance, she made herself a place secured at the 2009 NCAA Final All-Tournament team. She also had an impressive game in her junior year. Moore was ranked in the Top 12 of 10 in the Big East statistical categories, where she led with the No. 1 in points in each game.

Maya got victories in 150 games and lost 4 in her college career. She amassed total points of 3036, 1276 rebounds, 310 steals, 554 assists, and 204 blocks. Along with excellency in basketball, she was also a brilliant student. She completed her graduation with a 3.7 GPA. Following graduation, she was picked up by the Minnesota Lynx in the 2011 WNBA draft.

Moore was playing along with the talented players in the Minnesota Lynx. Despite that, she didn’t let others overshadow her and showed her brilliant game. She was named a WNBA Rookie of the Month in July 2011. Moore helped her team to start the 2012 season with a 10-0 run, which becomes the best start ever in WNBA history. She played along with the team until the 2018 season where she scored a season-high score of 38 against Mercury on July 22, 2018.

You May Also Like:   Richard Sherman Net Worth: How Rich is the NFL Player Actually?

Maya Moore is married to Jonathan Irons, who was freed from prison on 1st July 2020. He was sentenced to prison for 50 years for burglary and assault when he was just 16. She was helping Irons to get a release from prison in 2019 and 2020, and for that, she also missed out on WNBA and Olympic games. Moore announced her marriage to Irons in September 2020 on Good Morning America.

Moore met Irons first time when she was 18. She was having a great carer with UConn Huskies, and Irons had a doubt whether she would remain in his life or not. Moore became closer with Irons, and she used to send him books and letters. She soon started taking him as a family, and now Irons is her husband and an essential family member.

As of 2022, Maya Moore’s personal wealth is estimated to be around $350,000. As she was not playing basketball for two years, it must have affected her personal wealth. It’s still not sure whether she will return to WNBA or not. For more details on her story, a documentary on Maya Moore’s story has been made, and it will air next week on ESPN.

Vinny Del Negro Net Worth: How Rich is the Retired NBA Player?

Matteo Berrettini Net Worth: How Rich is the Italian Tennis Player?