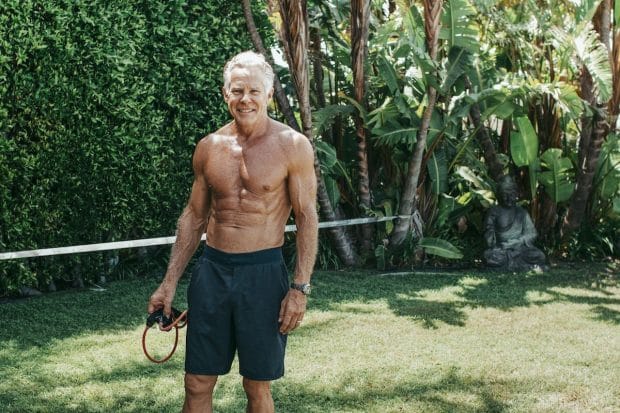 Mark Sisson is a renowned American fitness author and food blogger. He was a former athlete, who has participated as an Ironman competitor, distant runner, and triathlete. As of 2022, the fitness guru Mark Sisson net worth is estimated to be around $18 million.

Mark is best recognized as the author of best selling health & fitness book “The Keto Reset Diet”. He is also popular for running a health blog MarksDailyApple.com and YouTube channel, Mark’s Daily Apple.

Mark Sisson was born on the 20th of July, 1953 in Maine, United States of America. He grew up with four siblings. Mark studied at Williams College, where he earned a degree in biology.

Mark was initially involved in sports. He was a successful distant runner. During the 1970s, he was so quick to set the record as a runner for Portland (Maine) Track Club. In 1980, Mark competed at U. S. National Marathon Championships, where he finished at the 5th spot. The same year in 1980, he was qualified to compete at U. S. Olympic Trials.

Sisson was also one of the best Ironman competitors. In 1982, he competed at Ironman World Championship. He finished at 4th place in the championship.

Mark Sisson Net Worth and Career

In 2003, he stepped down from ITU’s roles because of some conflicting issues. After leaving ITU, he opened a dietary supplement company named “Primal Nutrition”. Mark mainly follows the paleo diet and considering that he has evolved his own version of diet naming it as “Primal Blueprint Diet”.

Mark started his own food blog called “Mark’s Daily Apple”. With the blog, he has shared the best diet plan and exercise to be fit and healthy. He has written few books based on diet and fitness. His first book “The Primal Blueprint” was published in 2009.

Mark recently published his fifth book “Two Meals a Day” in 2021. Besides writing health and fitness books, he has co-founded the brand Primal Kitchen with Morgan Buehler in 2015. However, Mark and Morgan sold the brand to Kraft Heinz for $200 million in 2018.

Mark Sisson is married to a lady named Carrie. He shares two kids with her. Though his profession is like an open book, he has shared very less information on his personal life.

As of 2022, Mark Sisson’s personal wealth is estimated to be around $18 million. He also has a YouTube Channel named Mark’s Apple Day. Mark is generating quite a handsome money from there. As of 2021, his channel has generated around 6.49 million views, which makes his estimated earning of $644500 to $1289000 from just YouTube.

You May Also Like:   Heather Rae Young Net Worth: How Rich is Selling Sunset Star?

In 2019, Mark and his wife Carrie bought an apartment at Miami condo Continuum South for $13.25 million.

Marcie Hobbs Net Worth: How Rich is the TV Star Actually?

Lionel Dahmer Net Worth: How Rich is Jeffrey Dahmer’s Father?