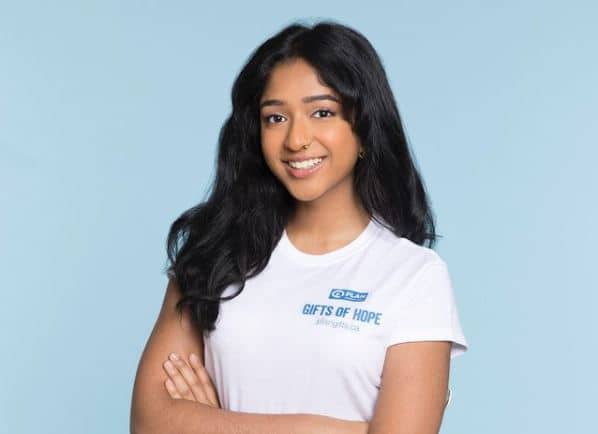 Ramakrishnan was born on December 28, 2001, and grew up in Ontario but is originally of Tamil descent. Her father Ram Selvarajah and mother Kiruthiha Kulendiren had to escape from Srilanka in 2001 because of the civil war due to which they came to Canada as refugees.

She then studied at Meadowvale Secondary School where she would actively participate in school plays. As a kid, she dreamed of being an animator for Pixar and thought that maybe she could work in a theatre company in Toronto.

Maitreyi Ramakrishnan Net Worth and Career

Ramakrishnan was preparing to go to the York University in Toronto to make this goal a reality where she was accepted to the theatre program. However, she would have to defer the program for two years as she would be able to start a career in acting straight away. This became possible when Ramakrishnan became the chosen candidate out of a total of 15,000 candidates who had applied for an open casting call to be the lead character for the Netflix series Never Have I Ever.

You May Also Like:   Chloe Veitch Height: Bio, Age, Net Worth, Boyfriend & More

She had created the audition tape in a local library and sent four videos to Los Angeles. Ramakrishnan was only 17 years old at the time and receiving the role got her a lot of media attention because this was a unique casting call and her Tamil Canadian background made it even more appealing. The producers and directors liked her sassiness which landed her the role when she later inquired why was chosen.

In the series, Ramakrishnan plays the role of an Indian-American high school student who deals with the death of her father. The series has become a big hit and has been critically acclaimed for being among the first South-Asian representation in Hollywood and aiding in breaking Asian stereotypes. The show has been created by Mindy Kaling and is partially based on her own experiences in Boston.

Ramakrishnan gained virality in 2020 when the show started to take off during the pandemic and mentions how that was a weird time as she was happy with the success of the series but also having mixed emotions being in the early stages of an unpredictable pandemic. She now has more than 1.6 million followers on Instagram and in 2021 was also included as a Breakout Actor in Time 100’s Most Influential People. She is now set to appear in the romantic comedy that can be streamed on Netflix called The Netherfield Girls.

Maitreyi Ramakrishnan currently stands to be 5 feet 6 inches or 167 cm tall and weighs around 52 kg or 115 pounds. Her body measurements are not available at the moment. Likewise, her hair color and eye color are both black.

You May Also Like:   Cyndi Lauper Net Worth, Age, Bio, Husband, and Movies

As of 2022, Maitreyi Ramakrishnan has an estimated net worth of $200,000. Her primary source of income is from her acting career. Her role in the Netflix show ‘Never Have I Ever’ helped her to earn both fame and money.

Tara Reid Net Worth: How Rich is Tara Reid Actually in 2022?