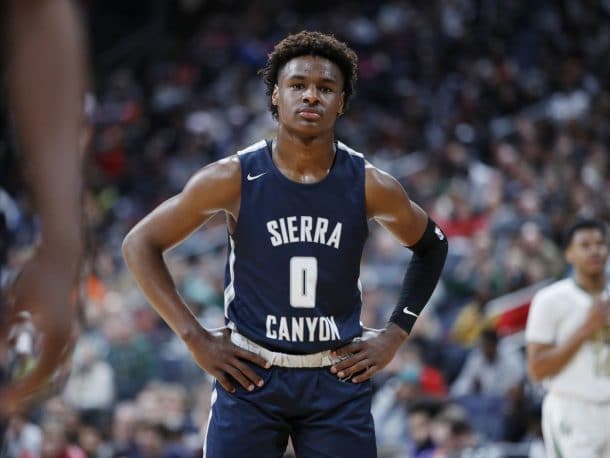 Bronny James was born on 6th October 2004 in Cleveland, Ohio, United States. He was born as an elder son of LeBron James and Savannah Brinson. His father, LeBron James is an NBA All-Star player. Bronny’s parents were not married at the time when he was born. James has two siblings; a brother Bryce and a sister Zhuri.

He was active in sports since his childhood. James was also interested in soccer besides basketball, However, his dad didn’t allow him to play soccer because of safety concerns.

James has been showing his tremendous basketball form since his school days. While was in fourth grade, he joined the Miami City Ballers team. In 2015, he played for Gulf Coast Blue Chips AAU team. He was successful in led his team to grab the fourth-grade championship which was organized at League Dallas/Hype Sports Summer Jam.

You May Also Like:   Keith Appling Net Worth: How Rich is Retired Basketball Player?

While he was in middle school at Old Trail School, he guided the school’s basketball team to win the Independent School League tournament.

In 2018, he played for North Coast Blue Chips where he led his team to get the John Lucas All-Star Weekend title. The North Coast was undefeated at Ny2LA Swish ‘N Dish Tournament. In June 2018, the team faced 9th-grade opponents at Jr. National Basketball Association. With no surprise, the team defeated their opponent easily and reached the quarterfinals.

In August 2018, he attended the private school Crossroads Schools which is located in Santa Monica, California. He showed his best form from the 1st game where he scored 27 points against Culver City Middle School.

Later, he was transferred to Los Angeles-based private K-12 school, Sierra Canyon School. He started playing for the school team which was one of the best high school basketball teams. He played his first game after entering high school in December. James scored 15 points in the game, which named him the most valuable player (MVP).

James continued his good form in the second game which was played against Viewpoint School. He scored the season’s highest point which was 17. As a freshman, James became the only player to play in all 34 season games.

The 17-year-old basketball prodigy currently stands at a height of 6 feet 2 inches or 1.88 m tall and weighs around 80 kg or 176 pounds. His chest size, waist size, and arms size are 44 inches, 30 inches, and 13 inches respectively. Likewise, his hair color and eye color are both black.

Bronny James is rumored to be dating Instagram model, Isavbarr since November 2020. The rumor started after he commented on her Instagram post. Nevertheless, he has not yet confirmed being in a relationship with his rumored girlfriend.

Bronny James is still young and currently playing for the high school team. He has not yet started playing basketball professionally. That makes us believe that he is yet to add a substantial amount to his net worth. At this time, we estimate his personal fortune to be around $5 million. However, his father, LeBron James, is one of the highest-paid basketball players in the world, with a net worth of $500 million by 2022.

Chesson Hadley Net Worth: How Rich is the Golfer Actually in 2022?