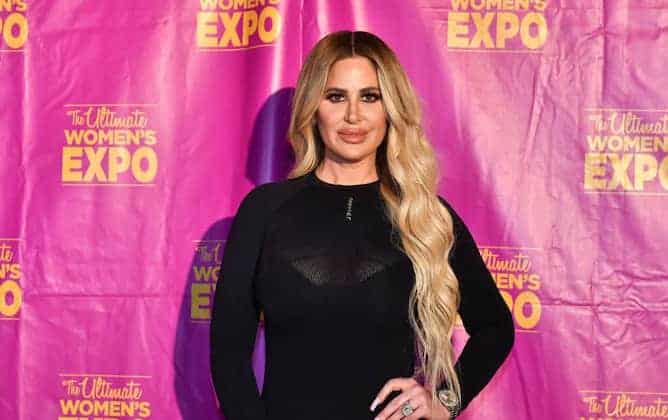 Kim Zolciak Biermann is an American reality TV star and singer. She is best known for starring as one of the original housewives on Bravo’s reality series, The Real Housewives of Atlanta. She left the series in the fifth season and returned as a friend in the 10th season. As of 2022, Kim Zolciak Biermann net worth is roughly around $3 million.

Kim Zolciak was born on May 19, 1978, in Pensacola, Florida. She was born to Joseph and Karen. Zolciak grew up with a brother, Michael. She was raised Roman Catholic and belongs to Polish and Italian descent.

Zolciak completed her high school graduation from East Catholic High School in 1996. Then, she attended the University of Connecticut and studied nursing. She shifted her place to Atlanta, Georgia at 21 years of age. Later, she settled in the suburb of Johns Creek.

Kim made her first appearance on Bravo’s reality series, The Real Housewives of Atlanta in October 2008. She left the reality show in the middle of the fifth season where her final episode was aired on December 9, 2012. When she was filming seasons four and five, Kim and her then-fiance became part of the spinoff show titled Don’t Be Tardy for the Wedding. The reality show chronicles her wedding preparations.

You May Also Like:   Brandi Passante Net Worth: How Rich is the TV Star Actually?

Zolciak returned to Real Housewives on the 10th season as a friend of housewives. Later, Bravo called her for a new reality show called NeNe and Kim: The Road to Riches. She was scheduled to star in Bravo’s new series along with fellow The Real Housewives member, NeNe Leakes. Nevertheless, the idea of the reality show was later dropped by Bravo.

Then, she competed on the 21st season of the dance competition series, Dancing with the Stars. In the dance reality show, she was paired with Tony Dovolani, who is a professional dancer. In September 2015, she withdrew from the series after performing for 3 weeks into the competition. She had to withdraw from the dance show due to a transient ischemic attack which restricted her from air travel.

Zolciak started working on a country music album in 2008. Later, she came up with her first song, Tardy for the Party, which was a dance track. Then, she followed the song with a remix EP in 2009. Along with her career as a singer and reality star, she has been involved in a business venture. Zolciak launched a line of skin-care products, the Kashmere Collection in May 2016. That same year, she started working on a perfume, Kashmere.

Kim Zolciak has been married twice. He was first married to Daniel Toce. She tied the knot with Daniel in 2001 and separated from him in 2003. Prior to Daniel, she was in a relationship with someone with whom she shares two daughters, Brielle Karenna and Ariana Lenee. Kim is bisexual and was in a romantic relationship with DJ Tracy Young.

You May Also Like:   Sutton Stracke Net Worth: How Rich is the RHOBH Star Actually?

Zolciak met her second husband, Kroy Biermann at the charity event, Dancing with Atlanta Stars in May 2010. She and Kroy’s meeting was shown on the third season of The Real Housewives of Atlanta. They turned into a married couple in Roswell, Georgia on November 11, 2011. Together, they share four kids.

Kim is set to lose her $2.6 mansion to foreclosure after Bravo canceled her reality show, Don’t’ Be Tardy. According to reports, Kim and her husband, Kroy failed to pay back a $300K loan after the reality series ended. A Notice of Sale Under Power made confirmation that their house is foreclosed and is being put up for sale. As per the legal document, the 6,907 square foot house will be sold at public out to the highest bidder for cash before the courthouse door of Fulton County, Georgia. Their mansion reportedly faced foreclosure before. However, at that time they were able to clear their debt.

Zim Zolciak’s net worth is estimated to be around $3 million as of 2022. She has amassed a vast chunk of amount from appearing in Bravo’s reality series, The Real Housewives of Atlanta and Don’t Be Tardy. She is also earning a hefty sum from her skin-care products and perfume.

Dr. Oz Net Worth: How Rich Is the Television Personality in 2022?

Lesa Milan Net Worth: How Rich is the RHODubai Star Actually?