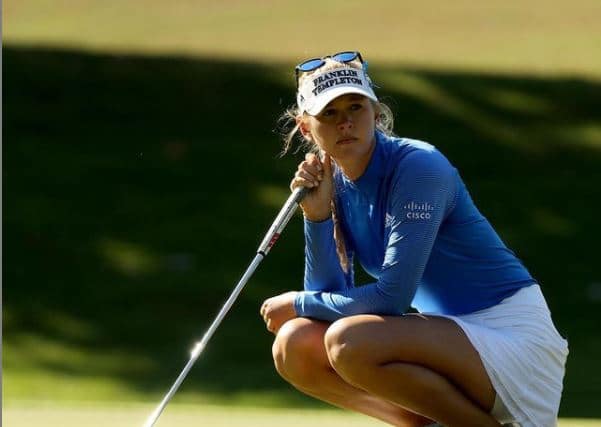 Jessica Korda is a 29 years old American professional golfer. She is best known for playing golf professionally on the LPGA Tour. Jessica has won six professional Tournaments. She has recently won the Diamond Resorts Tournament of Champions on January 24, 2021. As of 2022, Jessica Korda net worth is estimated to be roughly $5 million.

Jessica Korda was born on the 27th of February, 1993 in Florida, United States. She was born to parents, Petr Korda, and Regina Rajchrtova. Both of her parents have played tennis professionally. In fact, her dad, Petr Korda is a grand slam champion who won the 1998 Australian Open crown.

Jessica had started playing golf from a young age. She was a member of the 2009 United States Junior Solheim Cup. Likewise, she has competed at the 2010 United States Curtis Cup. Korda has been brilliant as an amateur golfer, where she won the 2010 South Atlantic Amateur. She also made the cut at 2008 and 2009 U. S. Women’s Opens. While competing at the 2010 U. S. Women’s Amateur, she finished in second place.

In the 2011 season, she appeared in 15 events in her rookie year. She had her best finish at the Avnet LPGA Classic where she finished tie for 19th place. Korda got her first professional win at the 2012 Women’s Australian Open. Likewise, she earned her second LPGA Tour title at the 2014 Pure Silk-Bahamas LPGA Classic. The same year, she got her third professional LPGA Tour to win at Airbus LPGA Classic.

Korda went on to grab her fourth LPGA Tour victory at Sime Darby LPGA Malaysia on October 11, 2015. After that, she had to wait over 2 years to get her firth professional win which she earned at Honda LPGA Thailand on February 25, 2018. Jessica has most recently won the Diamond Resorts Tournament of Champions title on January 24, 2021.

You May Also Like:   Terrelle Pryor Net Worth: How Rich is the NFL Player Actually?

Jessica Korda is currently dating a professional golfer, Johnny DelPrete. Her beau, Johnny came up as her caddy at the 2013 U. S. Women’s Open after Korda fired her caddy, Jason Gilroyed in the third round. She went on to fire her caddy, Jason after having several disagreements. As of now, Jessica and Johnny are still a romantic couple. The couple has not yet to announced their engagement and marriage date.

Sunisa Lee Net Worth: How Rich is the Gymnast Actually in 2022?