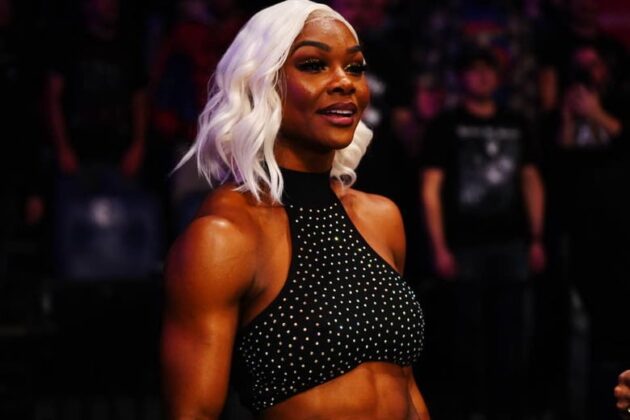 Jade Cargill is an American professional wrestler, fitness model, and Instagram star. She has been signed to All Elite Wrestling (AEW) and is the current AEW TBS Champion. Cargill has also gained massive popularity for her muscular physique and toned body. As of 2022, Jade Cargill net worth is estimated to be around $1.5 million.

Jade Cargill was born on June 3, 1992, in Gifford, Florida. The details regarding her parents are yet to get uncovered. For her study, she initially joined Sebastian River High School. Then, she attended Vero Beach High School. During her high school days, she helped her high school basketball teams to win two basketball district championships.

Cargill then attended Jacksonville University and earned a social science degree. There, she played basketball and was named to the Atlantic Sun Preseason First Team during her senior year. Additionally, she holds a certified master’s degree in child psychology.

Jade started off her wrestling career by attending a tryout at the WWE Performance Center in April 2019. After that, she began training at WWA4 Academy. Then, she was advised by her mentor, Mark Henry to begin training at Health Miller and Richard Borger’s Face 2 Face Wrestling School. Subsequently, after that, she started training at Nightmare Factory under professional wrestlers, Dustin Rhodes and Q. T. Marshall.

In 2021, she was coached by professional wrestlers, Bryan Danielson and Sonjay Dutt. Jade was coached by Dutt and Danielson at the request of AEW owner and founder, Tony Khan. She eventually made her professional wrestling debut with AEW on November 11, 2020, in an episode of Dynamite. In her first AEW appearance, she interrupted Cody Rhodes and teased about the arrival of Shaquille O’Neal. Just a day after that, AEW CEO, Tony Khan made an announcement that he had signed Cargill for a multi-year contract with AEW.

Initially, she was designated to work with Cody Rhodes and his better half, Brandi. In March 2021, Cargill was teamed up with Shaquille O’Neal in a match with Cody and Red Velvet, who replaced Brandi. In the match, Cargill and O’Neal came out as the winner. Thereafter, Jade wrestled in her first singles match against Dani Jordyn on the March 17 episode of Dynamite. Later, Cargill competed in the AEW TBS Championship tournament for two months from November 2021 to January 2022.

During her time at the TBS tournament, she defeated Thunder Rosa, Red Velvet, and Ruby Soho to become the inaugural AEW TBS Champion. She was successful to retain her AEW title against Julia Hart and Anna Jay on episodes of Rampage. Then, on the February 9 episode of Dynamite, she competed against the debutant A.Q.A. for her title. In the end, she successfully defended her title.

Following that, she went one on one against Tay Conti on March 6 at Revolution. She was able to retain her title against Conti. Then, she formed the Baddie stable along with Kiera Hogan and Red Velvet on the April 13 episode of Dynamite. Jade continuously retained her winning streak to 30-0 while defending her title against Marina Shafir on the April 22 edition of Rampage. On May 29, she entered the ring against Anna Jay and successfully defended her reigning title. She continuously retained her title at Road Rager on June 17 against Willow Nightingale.

Jade Cargill is currently in a relationship with professional baseball second baseman, Brandon Phillips. She also shares a daughter, Bailey Quinn with Phillips. Cargill is available on Instagram under the user name, @jadecargill. She has 842K followers on her official Instagram account. Her latest Instagram post was shared on November 5 and has the caption “Remember that you are the source of your own power”.

Jade Cargill’s net worth is estimated to be around $1.5 million as of 2022. She has accumulated most of her earnings by working at AEW. Additionally, she works as a child shrink as per her Instagram bio.

Sally McNeil Net Worth: How Rich is the Bodybuilder Actually?

Hasbulla Magomedov Net Worth: How Rich is ‘Mini Khabib’ Actually?