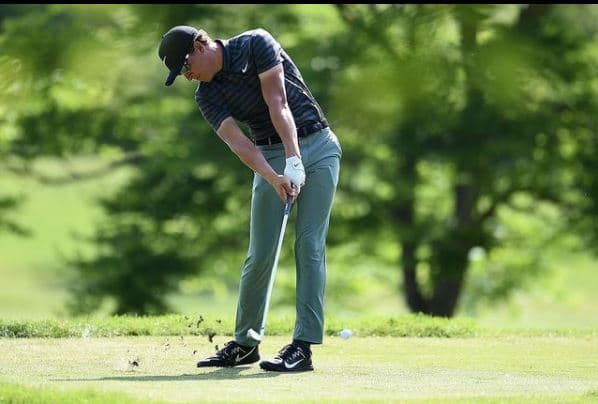 Cameron Champ is a 27 years old American professional golfer. He is best known for playing golf professionally on the PGA Tour. Champ has won four professional tournaments. He recently won the 3M Open PGA Tour on July 25, 2021. As of 2022, Cameron Champ net worth is estimated to be around $4 million.

Cameron Champ was born on the 15th of June, 1995 in Sacramento, California, United States. His father, Jeff was also a baseball player who played for two seasons in the Baltimore Orioles organization.

Cameron has studied at the Texas A&M University, where he played along with the University’s sports team, Texas A&M Aggies. He showed his best form in his college career. Champ got the victory on the OFCC/Fighting Illini Invitational and finished at the top 10 of six tournaments.

Champ started his professional career in 2017 after he made it through the U. S. Open by competing in a playoff through sectional qualifying. In his first major appearance, he finished at eighth place.

Cameron then went on to compete at Web.com Tour Qualifying Tournament in December 2017. There he earned a place on the Web.com Tour in 2018. In July 2018, he competed at the 2018 Utah Championship. During the 2018-19 PGA Tour season, he was able to earn his tour card. While competing at the 2018 Web.com Tour regular season, he finished at 6th place.

Champ earned his first PGA Tour title on October 28, 2018, by getting a victory at the Sanderson Farms Championship. He had a brilliant game in the 2018 Fall series as he was able to finish in the Top 30 in four major tournaments such as Safeway Open, Mayakoba Golf Classic, Shriners Hospitals for Children Open, and RSM Classic. His good performance at the tournament made him listed at 97 on the world’s official golf ranking on November 19, 2018.

Cameron is mostly known for his long-hitting shots on the PGA Tour, While making his debut at the OHL Classic, he registered 129.79 mph average clubhead speed. During the 2018-19 season, he was the longest driver on the tour with a 317.1-yard average. Champ won the title of Safeway Open on September 29, 2019. It was his first-ever victory in the full-strength PGA Tour Tournament.

Cameron was tested positive for COVID-19 just before the Travelers Championship on June 23, 2020. He was the second PGA Tour player who tested COVID positive after Nick Watney. Champ has recently won the PGA Tour title on July 25, 2021, at the 3M open. He got the victory by two strokes.

Cameron Champ is married to Jessica Birdsong. The pair was dating for a long time before they made their relationship official by getting engaged in December 2019. On December 3, 2020, he tied the knot with Jessica.

You May Also Like:   Greg Norman Net Worth, Age, Bio, Wife, and LIV Golf

On April 24, 2021, he wished his wife Jessica Happy Birthday by sharing a photo on Instagram. He wrote on his Instagram post “Happy Birthday babe!! You’re the greatest thing that ever happened to me! I love you more than life itself.”

Ryan Murphy Net Worth: How Rich is the Swimmer Actually?