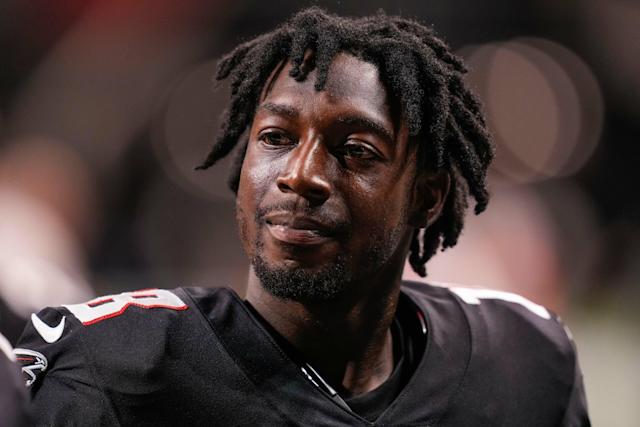 Calvin Ridley is a 27 years old American football wide receiver. He is best known for playing in the National Football League (NFL) for the Atlanta Falcons. Calvin was selected by the Atlanta Falcons in the 2018 NFL Draft. Calvin announced on Sunday, October 31, that he is stepping away from football at the moment to focus on his mental well-being. As of 2022, Calvin Ridley net worth is estimated to be around $12 million.

Calvin Ridley was born on the 20th of December, 1994 in Fort Lauderdale, Florida, U. S. Not much is known about his parents and early life. He seems to have interest in sports since he was a little kid. For his study, he joined Monarch High School. There, he played for the high school football team.

Calvin continued his love and passion for football when he attended the University of Alabama. He played college football as a true freshman in 2015. Ridley had 3 receptions for 22 yards when he played his first career game against the University of Wisconsin. On September 26, 2015, he was able to score his first collegiate touchdown.

Ridley had a good start in the 2016 season as he remained a strong opponent for the Crimson Tide. He had 9 receptions for 129 receiving yards in the second game of the season which was played against Western Kentucky. He continued to shine in the 2017 season where he started off with 7 receptions of 82 yards and a touchdown in a victory game against Florida State.

Calvin announced in January 2018 that he would be foregoing his senior year at Alabama and would be entering in 2018 NFL Draft. He was eventually selected by the Atlanta Falcons in the first round of the 2018 NFL Draft. He had 4 receptions for 64 yards in his first NCL against the Philadelphia Eagles. At the end of the 2018 season, he led all rookies in both receiving yards and touchdowns. He also became the fourth Atlanta Falcons to be named in PFWA All-Rookie Team.

For his brilliant performance in the 2020 season, he was named to the Associated Press’ All-Pro 2nd Team. The Atlanta Falcons exercised the 5th-year option on his contract on May 3, 2021. Though, Ridley gave shocking news on October 31 on Twitter that he’s stepping away from football at this time due to mental health reasons.

Calvin Ridley is currently dating a lady named Dominique Fitchard. As per sources, Dominique is a student of educational therapy at Tuskegee University. The pair engaged in 2019 after he proposed to his lady love on the occasion of her birthday. Dominique’s Instagram bio reveals that she co-owns the Hair extension service providing company and online clothing outlet.

You May Also Like:   Farrah Brittany Net Worth: How Rich is Buying Beverly Hills Star?

As of 2022, Calvin Ridley’s personal wealth is estimated to be around $12 million. According to Ridley’s optioned contract in 2021, he receives a guaranteed salary amount of $11,116,000 from the Atlanta Falcons for the 2022 season.

Alpo Martinez Net Worth: How Rich was the Drug Dealer Actually?