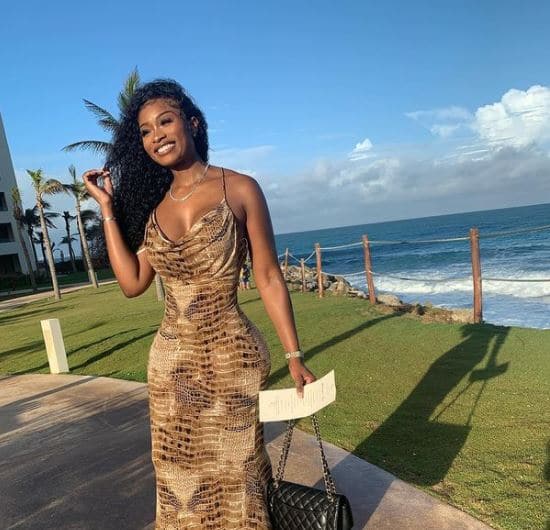 Armani Caesar is an American rapper. She is best known for her 2020 released album “The Liz”. Armani is currently signed to an independent record label, Griselda Records. She is in fact the first lady of Griselda Records. Armani Caesar has not yet revealed her true net worth figure. According to our estimate, her net worth is estimated to be around $200,000.

Armani Caesar was born on June 5, 1989, in Buffalo, NY, United States of America. Armani grew up listening to hip-hop songs. She got inspired by the hip-hop genre because of her mom, who also loves hip-hop music. She received many hip-hop song CDs when she was just 5 years old.

Armani has grown up listening to rap songs of Lil Kim, Missy Elliott, and Trina. As she grew older, Armani started to record songs on PC downloading the instrumental beats and later burning the recordings into CDs.

At 16 years of age, she got an early hope to make her dream true. She saw the flier local studio owned by DJ Shay who turned godfather for Armani. She recorded her first song in his studio. DJ Shay shortly passed away in August 2020. Armani conveyed her thankful message to him for believing in her and giving an early breakthrough an Instagram post.

You May Also Like:   Dababy Net Worth, Age, Brother, and Wiki

Armani was also interested to become a nurse earlier. She later became interested to study computer and information science, but eventually, she selected marketing at last. Armani got pulled towards music while she attended a “Hip Hop Context 1973-1997”. It was a class taught by North Carolina’s 9th Wonder and Christoper Play Martin. The class worked as a magnet for her, which had a big impact on her making career in music.

To work on her dream, she initially had to face struggling days. She has even danced at strip clubs. The dancing job supported her to live in an expensive Buff City. By collecting some cash from her job, Armani released the mixtape titled “Caesar’s Palace” in 2015. The song started worked well for her as she was started to recognized in Carolina Places.

Later, the producer Rico Love offered her to feature on Love’s 2015 album titled “Turn The Lights On”. In 2018, she released her own song “Can’t Take Him Back”.

As she was not getting success as she expected, Armani was about to quit rapping. However, she got signed to Griselda Records in March 2020. It worked like a golden buzzer for her.

With the independent record label, she released the album titled “The Liz”. The album has 11 tracks, where her exceptional singing talent shined like a star. The album was a massive hit which also received an impressive 7.2 from the music publication Pitchfork.

Besides singing, Armani is also managing her own boutique clothing business named “Armani’s Closet”. She is also helping young women who want to establish their own businesses through the medium of her e-books.

Armani Caesar currently stands at a height of 5 feet 3 inches or 160 cm tall and weighs around 60 kg or 132 pounds. Her body measurements are 35-27-37 inches. Likewise, her eye color and hair color are both black.

Who is Armani Caesar Boyfriend?

It’s good news for all Armani Caesar’s fans that she is still single. However, a few months back the dating rumors of Armani and YFN Lucci were spreading all around. The dating rumors were fired up when she posted cozy pictures with YFN Lucci on Instagram. Later, she denied the rumors posting on her Twitter that “I am single relax”.

As of 2022, Armani Caesar’s true net worth value is yet to uncovered. But, looking at her recent success from the album “The Liz”, it is estimated that Armani has gathered a hefty amount. Based on our estimate, her net worth may be over $200,000.