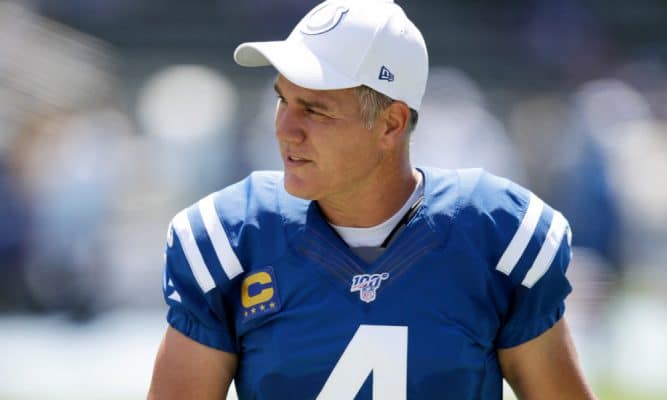 Adam Vinatieri is a retired American football placekicker. He is best known for playing 24 seasons in National Football League (NFL) with two big teams; New England Patriots and Indianapolis Colts.  As of 2022, Adam Vinatieri net worth is estimated to be around $25 million.

Adam is NFL’s all-time leading scorer, and one of the best kickers in NFL history. He recently announced his retirement on Pat McAfee’s podcast “The Pat McAfee Show” on May 26, 2021.

Adam Vinatieri was born on 28th December 1972 in Yankton, South Dakota. He was born to parents, Paul Vinatieri and Judy M. (Goeken). Adam has three siblings and his younger brother, Beau has also played football as a placekicker at Black Hills State University. He had an issue with reading when he was a child, due to which, he was included among the kids who have learning disabilities.

For his study, he joined Central High School. During his school days, he was a letterman in various sports like football, soccer, basketball, wrestling, and basketball. He was so good in football that as a senior player, he received first-team All-State honors. Adam came out holding a high school graduation degree in 1991. Earlier, he was playing as a quarterback, and middle linebacker before starting as a kicker.

At first, he joined the U. S. Military Academy, but, he returned home from the academy in just two weeks. After that, he attended South Dakota State University, where he played as a placekicker and punter. In his collegiate career, he was an all-time leading scorer, with total career points of 185. Later, he made an entry at the World League of American Football, and there, he was playing a roaster position as a placekicker and punter with the team, Amsterdam Admirals.

Adam was signed as an undrafted free agent in 1996 by the Patriots. He was able to make his way into the team replacing their star player, Matt Bahr. With Patriots, he played first 10 years in New England. During that time, he won 3 titles and 4 Super Bowls. He made his debut in Super Bowl during the 1996 rookie season. However, his team faced defeat against the team, Green Bay Packers.

Vinatieri was signed by the Indianapolis Colts on March 22, 2006, where he replaced Mike Vanderjagt. He was signed into the Colts for 5 years. With the Patriots, he completed the 2006-07 postseason with the total points of 49 and 14 field goals. He went on to set more records in his upcoming seasons. In 2015, he was named as 98th best player on NFL Top 100 Players of NFL Network.

At the end of the 2018 season, Adam broke his own record of a 53-yard field goal. With that, he became the oldest player who kicked 50+ yard field goal Adam played his 24th season in NFL against Los Angeles Chargers on September 8, 2019. The game turned out as a nightmare for him, as it was one of the worst games of his NFL career. During the game, he missed 2 extra points and missed 3 field goal attempts. Following next week, he again missed 2 extra points playing against Tennessee Titans.

Adam was placed on the injured reserve players list after he went through knee surgery in the 2019 season. He finished the 2019 season with his career-low points in field goal and extra points. Vinatieri made a decision to retire from the NFL, which he announced on May 26, 2021. He announced his retirement news on the podcast “The Pat McAfee Show”.

Adam Vinatieri is married to a lady named Valeri Vinatieri. The couple tied the knot in 2001. We don’t have enough information regarding his married life.  He seems to be balancing both his personal and professional life. It’s been over 2 decades since he married his wife Valeri, and still, he is sharing a strong bond with her.

As of 2022, Adam Vinatieri has accumulated a total net worth value of $25 million. He has received a vast chunk of money from Los Angeles Colts. Adam was signed by Colts with a whopping amount of $3.5 million as a signing bonus in 2006, and upon extension of the contract in 2016, he received $6 million.

Brendon Todd Net Worth: How Rich is the Golfer Actually in 2022?

Keith Appling Net Worth: How Rich is Retired Basketball Player?